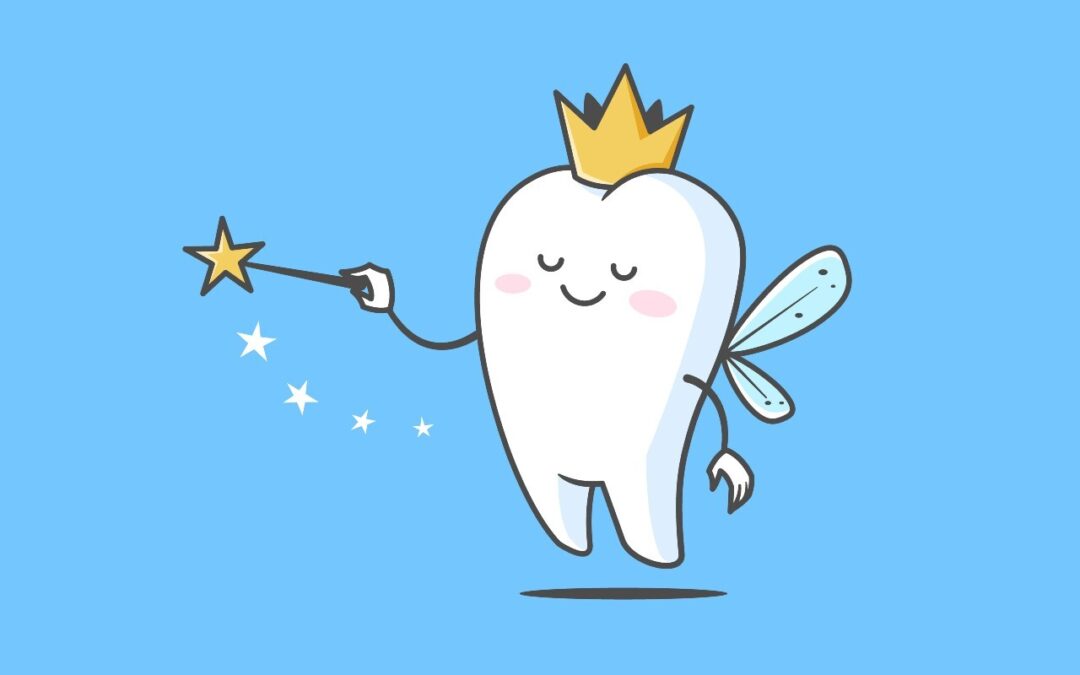 If you have kids near the ages of four to six years old then the topic of the tooth fairy has probably come up a time or two (or on a daily basis if they’re excited about a loose tooth). In fact, did you find this article because you did a quick Google search for backup?

When your kids ask “is the tooth fairy real” or “what does the tooth fairy look like”, you might be tempted to give a simple yes or no answer and then make up something that sounds like what you were told when you were a kid. Nevertheless, there actually is an origin story to the myth, and it’s a convoluted one that reaches further back in time than you’d think: nearly a millennium. Moreover, research is showing that saving those baby teeth could have health benefits later on in life. First, we’ll go back in time, and then we’ll talk about the future.

Yes, baby teeth were a talisman of sorts in the old Norse and Northern European cultures as far back as the tenth century. In the earliest writings of these cultures, the Eddas, references to a tradition of exchanging money for a baby tooth can be found. Baby teeth were believed to bring luck to a warrior in battle, and some cultures even made necklaces of them. This superstitious tradition was known as the “tand-fé” which translates to tooth fee. Interestingly and perhaps completely benign, the German word for fairy is “Fee”. Moreover, one Norse myth involves the god Frey who received an entire fairy kingdom as a “tooth gift”.

In the Middle Ages in England, children were instructed to burn their baby teeth to save themselves hardship in the afterlife. Children who refused to do so were warned they would search for their baby teeth forever in the afterlife. Other cultures have children bury their teeth, or throw them into the air. Nevertheless, these baby teeth mythologies and superstitions didn’t actually involve a tooth fairy until much more recent times: 1908 to be exact.

Where did the Tooth Fairy Come From?

In 1908, the Chicago Daily Tribune Household Hints section featured a helpful tip from reader Lillian Brown and the tooth fairy was born. In response to the concern that children didn’t want to have their loose teeth pulled, Ms. Brown wrote,

“Tooth Fairy.
Many a refractory child will allow a loose tooth to be removed if he knows about the Tooth Fairy. If he takes his little tooth and puts it under the pillow when he goes to bed the Tooth Fairy will come in the night and take it away, and in its place will leave some little gift. It is a nice plan for mothers to visit the 5-cent counter and lay in a supply of articles to be used on such occasions.”

Of course, it’s entirely possible that this was a long-standing tradition in Ms. Brown’s family going back generations, or maybe her family ran the 5-cent counter and she was cleverly thinking to drum up more business. Regardless, that is the first written mention of the tooth fairy as we know it.

Should You Pull a Loose Tooth?

Just because it seems parents were looking for ways to pull loose teeth in 1908 does not mean you should be doing that in 2021. We should take special note that we do not believe in pulling a loose tooth unless absolutely necessary. We prefer to allow a loose tooth to fall out, on its own time and without force. Your child’s body, including the workings of their mouth, is a powerful and intentional force and we should trust that the tooth will fall out when it’s good and ready.

If the gum around the loose tooth is inflamed, give us a call. There are certain circumstances in which we may decide pulling a tooth is best.

What Does the Tooth Fairy Do with Teeth?

This one can be a stumper for parents. Because really, their little but very rational and inquisitive minds are investigating and asking questions about everything as they learn about the world around them. Why would anyone want to collect a bunch of fallen out teeth since our warriors don’t wear teeth necklaces anymore?

Save Those Baby Teeth for the Future

Well, there’s some really interesting research out that shows you should collect and store your kids’ baby teeth for later on in life. The advancements being made today in both medicine and science are astonishing and the baby teeth may be an integral part of the future.

Baby teeth, and wisdom teeth, have adult stem cells that are referred to as “mesenchymal stem cells”. These stem cells are important because they can be applied to bone and tissue regeneration treatments. As of today, more than 2,000 clinical trials have been completed or are in process to study how these mesenchymal stem cells can help with treatments for a wide range of diseases including (but not limited to) the following:

In order for your child’s baby teeth to be viable in the future, they require proper storage. There are a few services already established for exactly this purpose such as Store-A-Tooth, or The Tooth Bank. If you’re interested in this idea for the future, do a little research about the companies to decide which one feels right for you.

When was the last time you brought your child in for a dental checkup and cleaning? Our offices are open and we want to see happy healthy smiles in our community. Give us a call to schedule an appointment at one of our four convenient locations.