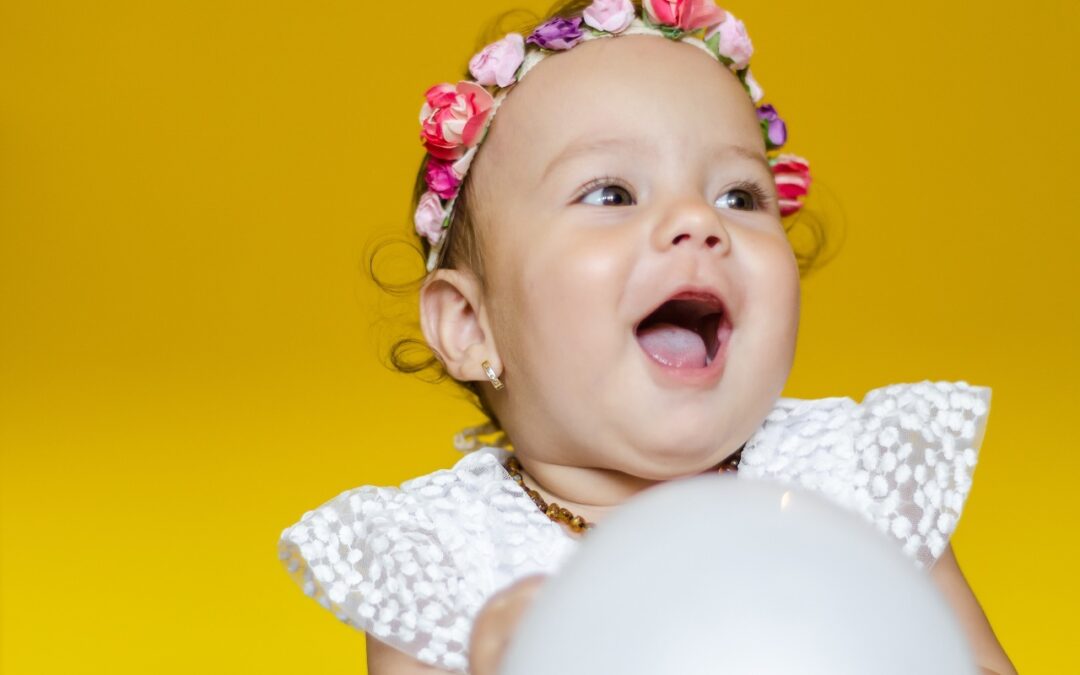 Did you know that tooth development actually begins before your baby is born? That’s a surprising fact, isn’t it? Generally, their primary teeth begin to form during the first trimester. At full gestation, most babies have a complete set of primary teeth inside their gums: ten on top, and ten on the bottom.

Primary teeth are also commonly referred to as baby teeth, milk teeth, or deciduous teeth (that last one is decidedly un-common among civilians as it’s also the term that refers to the baby teeth of any mammal).

If your baby hasn’t had their first tooth erupt yet, all the while you see other babies with toothy little gurgling grins, don’t worry! Odds are, you are just experiencing selective perception. You’re keyed into the subject of teething babies and so your brain is honing in on every baby with a tooth in your radius while simultaneously ignoring all the gummy grins.

Let’s first put you at ease: just because your baby hasn’t had a tooth erupt yet doesn’t mean it’s delayed.

There is a truth about your baby that is important for you to get behind: all babies are different. Differences in skin color, eye color, hair color, and so on are all determined by genetics, and our genetics influence our teeth as well. This tooth eruption timeline is a general guide, taken directly from the American Dental Association. You’ll note that the timeline includes ranges, but even if your baby’s situation falls outside a timeline, it’s no immediate cause for worry.

Typically, the bottom central incisors are the first to erupt, followed by the upper central incisors. The chart clearly states a timeline range of six to ten months, but sometimes a first tooth can erupt earlier or later. The lateral incisors generally are the next to erupt between nine to 16 months, followed by the canines at 16 to 23 months and then the first and second molars between 13 and 33 months. As you can see, there’s even some overlap on the timeline between teeth. It’s entirely possible a molar could erupt before or simultaneously with a canine. Just because your neighbor’s baby is happily sprouting its incisors while your baby is all gums doesn’t mean anything is wrong. Let’s review possible causes for delayed eruption now.

The phrase “delayed eruption” is not a disorder, it is merely a term referring to when a baby’s tooth or teeth don’t come in when expected. So, what is the most frequent cause for delayed tooth eruption? Family genetics.

A significant delay can be categorized as the first teeth erupting between twelve and 24 months of age, and the others erupting after four years. When it’s a significant delay, other causes may be in play such as:

Furthermore, some developmental delays and syndromes have been associated with delayed eruption of primary teeth. These include:

When to Bring Your Baby to the Dentist

We recommend to all parents that they schedule the first dental appointment for their baby upon the first tooth’s eruption. Nevertheless, as we’ve just discussed, sometimes babies turn one year old before their first primary tooth makes an appearance. If your baby is 12 months old, whether they have a tooth or any teeth at all, you should schedule a dental appointment with your pediatric dentist.

Are There Risks Associated with Delayed Eruption?

Ultimately, this is the question of which is likely weighing most on your mind. What are the consequences associated with a delayed primary teeth eruption?

Consider for a moment the reasons we strongly advocate (on repeat!) that parents encourage proper dental hygiene in their children, even prior to their permanent teeth eruption:

Number three is a long one, but do you see where we’re headed with it? The primary teeth serve important roles in your baby’s development, and when they are delayed it can have an impact on those things.

How to Treat Delayed Tooth Eruption?

The only circumstance in which there is a treatment for a delayed eruption of the primary teeth is if it is an indicator of malnutrition. If you are concerned that your child has delayed eruption of their primary teeth schedule an appointment with one of our pediatric dentists. Alternatively, if your little one is turning one soon and hasn’t yet had their first dental checkup, the time is right! Call us today to schedule an appointment at one of our three convenient locations.

This site uses Akismet to reduce spam. Learn how your comment data is processed.